Lactation in the Goat Animations
Hormones of Lactation

Many different glands, organs and systems contribute to development of the mammary system, and initiation and maintenance of lactation.

A hormone is a substance that is produced by one organ or gland but has an effect on a different, often remote organ.

Some hormones affect all body tissues, but others may affect only one gland or organ - the target organ. 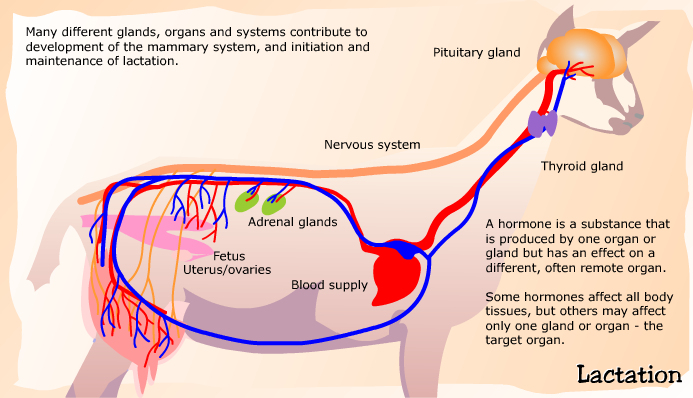 One of the most important glands involved in the mammary development and in lactation is the pituitary gland. 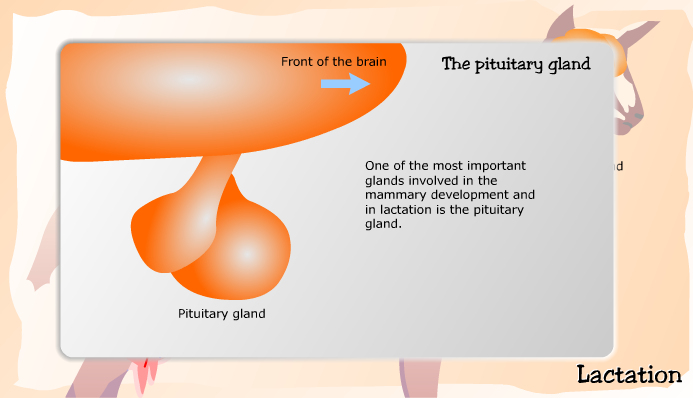 The gland hangs from a tiny stalk from the base of the brain.
It has two lobes.
The anterior lobe or adenohypophysis is not directly connected to the brain. 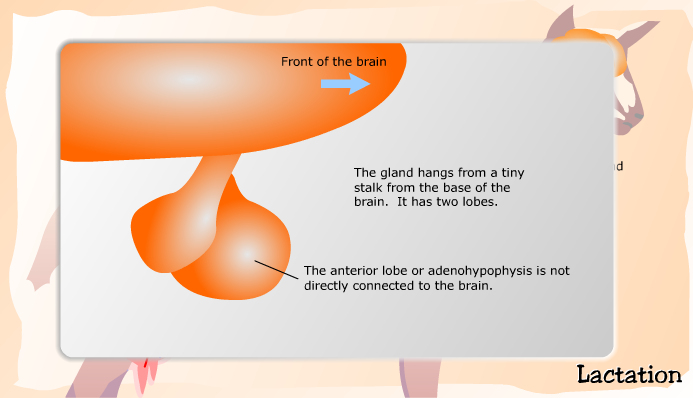 The posterior lobe or neurohypophysis is connected to the brain by the pituitary stalk. 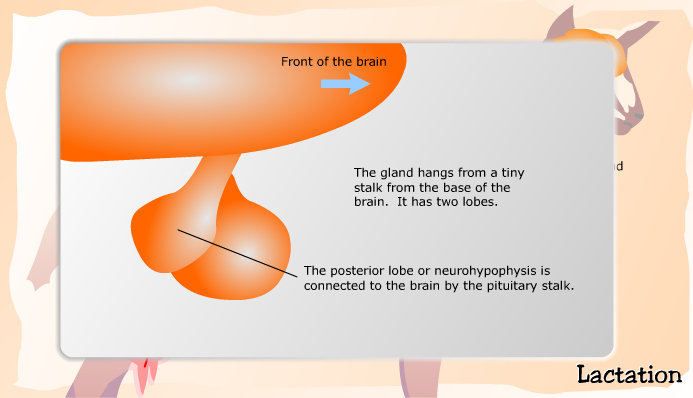 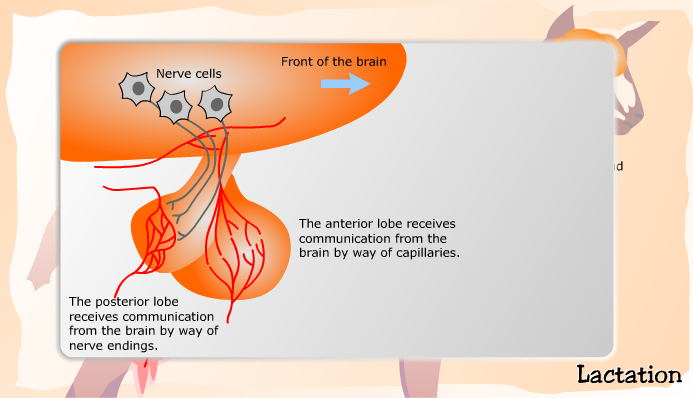 ADH (antidiuretic hormone) or vasopressin functions to help the kidneys return water to the system.
This is important in lactation to preserve water for milk production.

Oxytocin acts on the muscle cells of the alveoli causing them to contract to push milk into the ducts.
Oxytocin also causes contraction of the muscles of the uterus during labor. 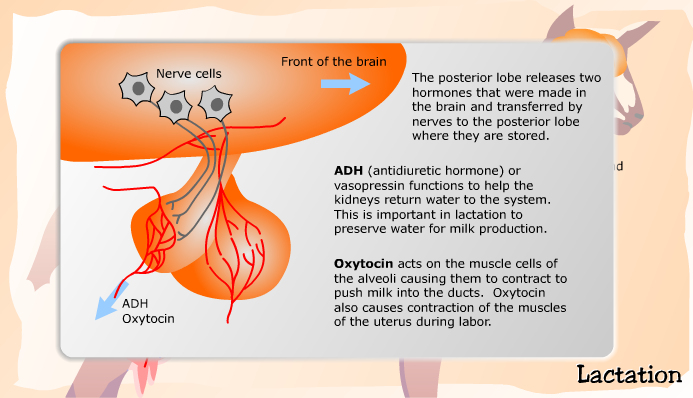 The anterior lobe produces six hormones, all of which have a direct or indirect
effect on mammary development and lactation. 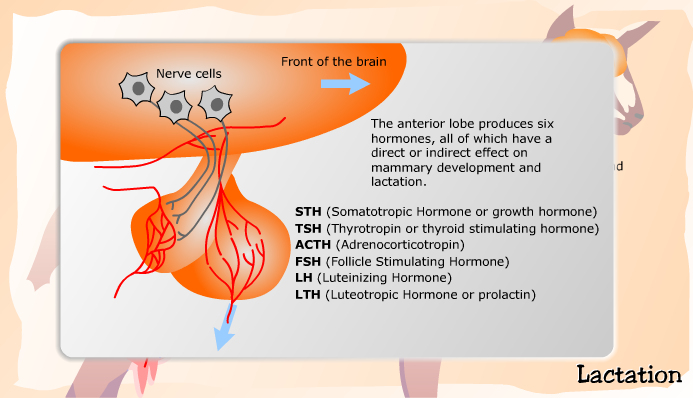 STH (Somatotropic hormone or growth hormone, sometimes referred to as GH)
causes the growth of all body cells that are able to grow including alveoli.
STH has a direct effect on the initiation of lactation, rate of milk production and on the milk yield.

TSH (Thyrotropin or thyroid stimulating hormone) acts on the thyroid gland stimulating the production of thyroxine.
TSH is not absolutely necessary for milk secretion but influences milk yield and duration of lactation. 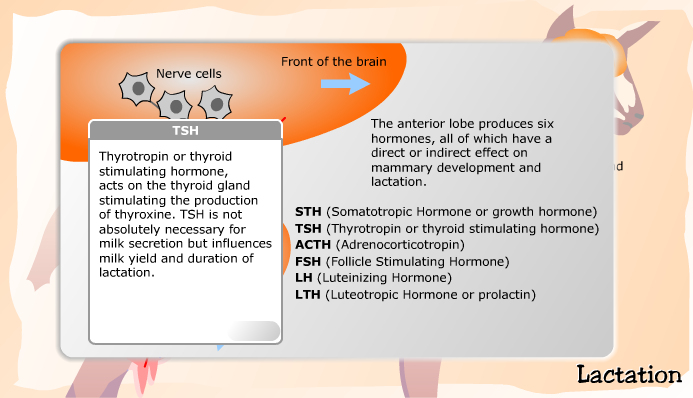 FSH (Follicle stimulating hormone) acts on the ovary to produce estrogen
which is necessary for the growth of the alveoli and duct system.
As blood estrogen increases, the production of FSH decreases. 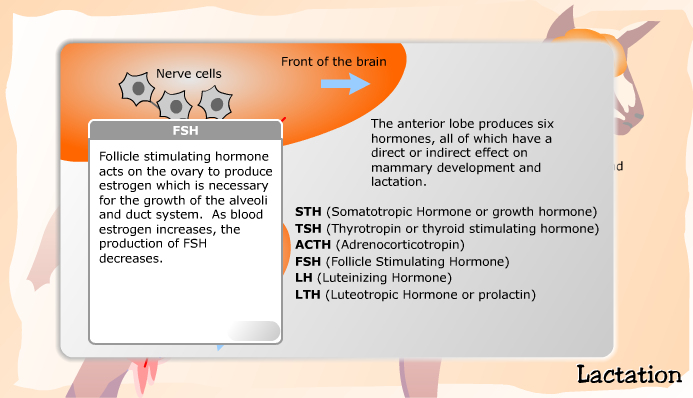 LH (Luteinizing hormone) production increases as FSH levels decrease.
LH stimulates the ovary to produce estrogen and progesterone which contribute
to development of the mammary gland especially later in pregnancy.

LTH (Luteotropic hormone, or prolactin) has a direct influence on mammary gland growth,
the initiation of lactation and maintenance of milk secretion.
Has an indirect effect on ovary to produce progesterone.
Release stimulated by sucking. Increases milk production in goats in late lactation. 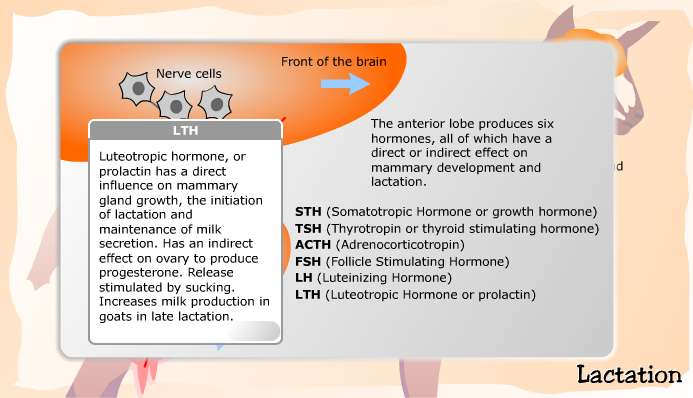 The thyroid gland has two lobes on either side of the trachea that is connected
by fibrous tissue in the goat. 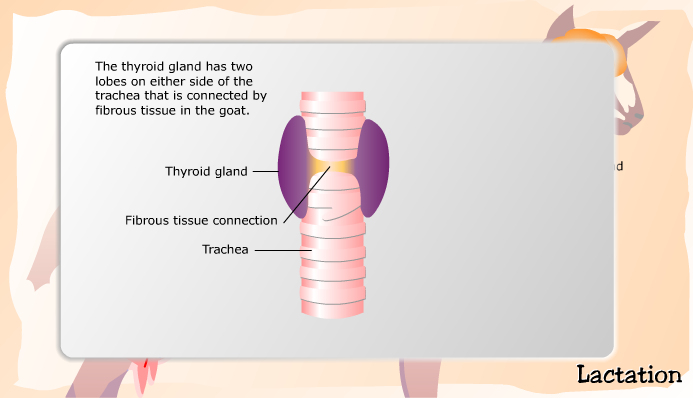 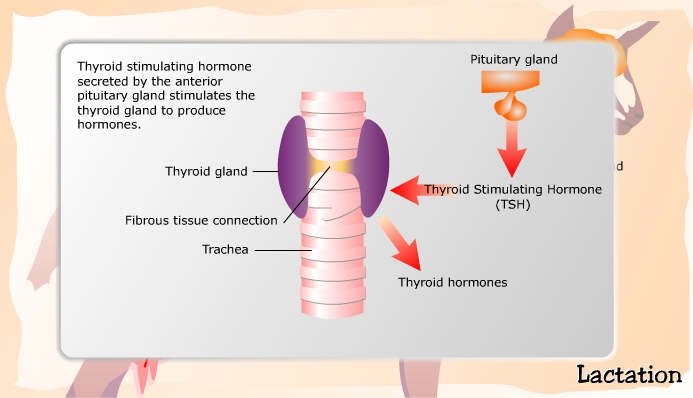 The thyroid hormones T4 (thyroxine) and T3 (triiodothyronine) is released into the blood system
and influences many different tissues in the body.

Goats have about three times more T4 than T3. 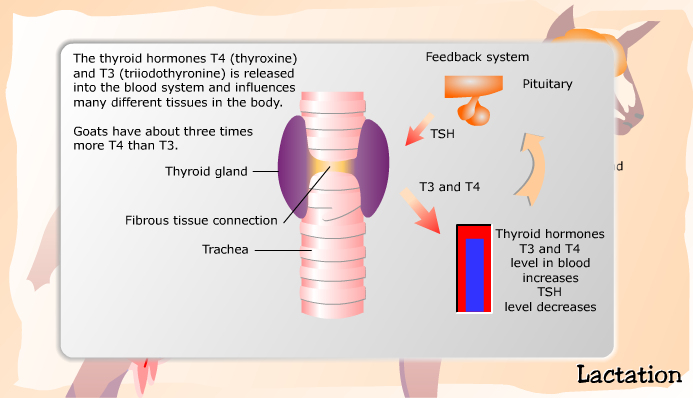 Thyroxine (T4) is important for maintaining lactation and milk yield. 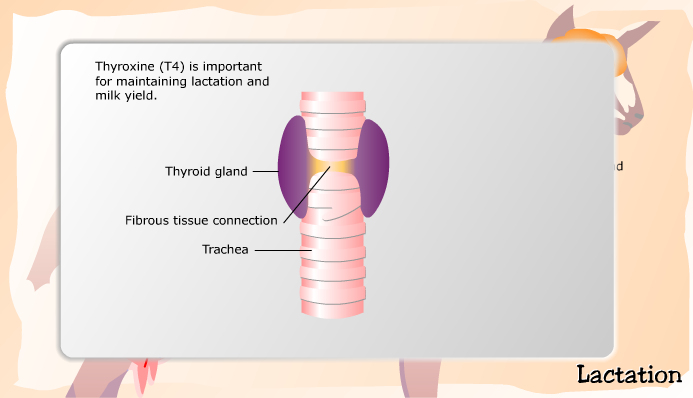 The hormones produced by the adrenal glands are essential to life process. 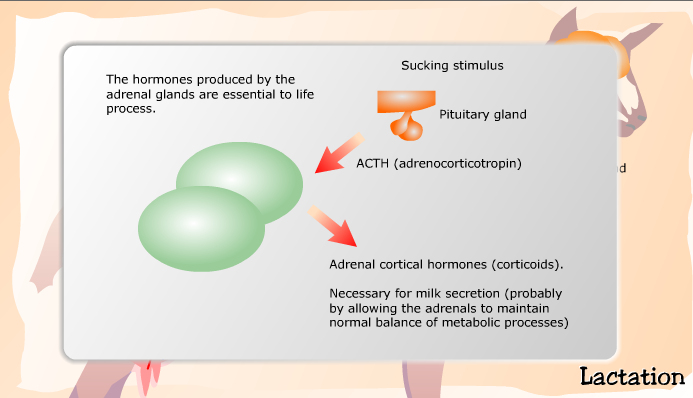 The sucking stimulus to the nerves in the udder travels to the brain.
Nerves in the brain stimulate the pituitary gland to release hormones such as oxytocin
which stimulate basket cells of alveoli to contract and push milk out into the ducts.
It takes a few minutes for the cycle to be completed. 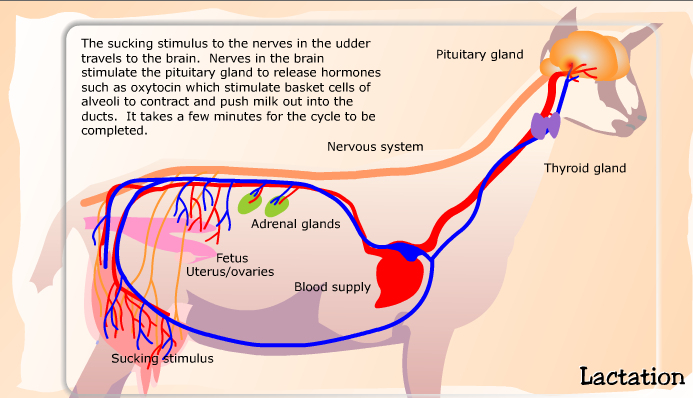 In goats, the milking stimulus is not required for milk let- down, like it is in cows.
However, oxytocin will aid in complete emptying of the milk from the alveoli. 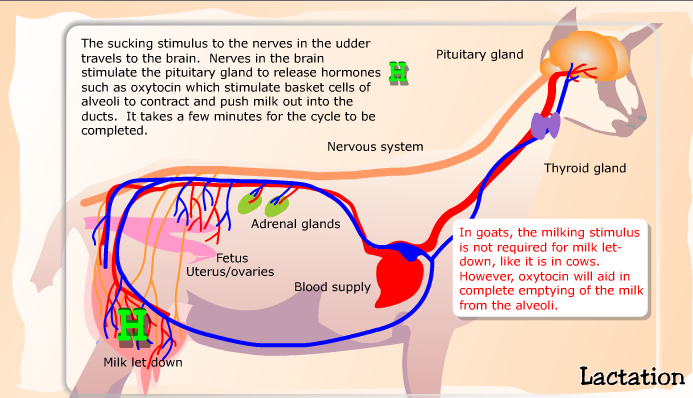 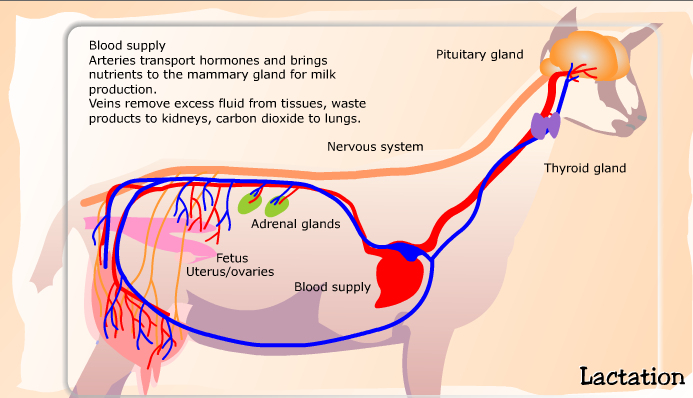 During pregnancy the fetus produces estrogen and the ovary produces progesterone.

The mammary tissue grows, but lactation is inhibited by prolactin inhibitory factor (PIF). 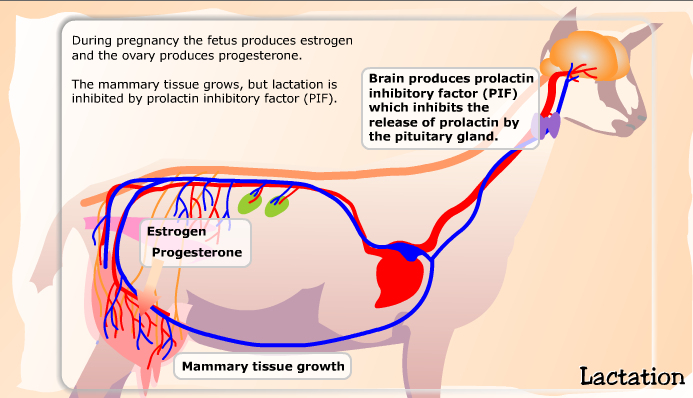 Brain produces prolactin inhibitory factor (PIF) which inhibits the release
of prolactin by the pituitary gland.