The Biology of the Caprine Arthritis Encephalitis Virus

Structure of the CAE virus 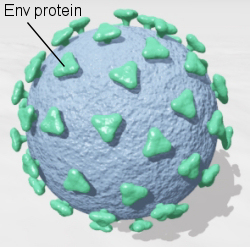 The CAE virus has a similar structure to all other lentiviruses. On the surface it is quite simple. The outer membrane is called the envelope and is studded with a protein called the envelope (Env) protein. The virus uses this protein to gain access to the inside of its target cell. 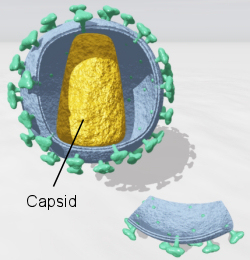 If we peel open the envelope we find inside a cone-shaped structure. This is called the capsid. Its outer surface is made up of a protein with the strange name gag which comes from the fact that this protein is specific to a group of virus so it is called Group specific AntiGen. You can also see that the envelope (in blue) is double. It came originally from the cell that gave birth to the virus. This is explained under the life cycle section. 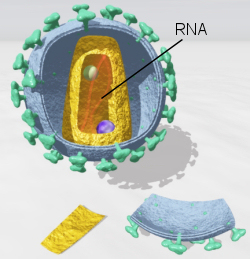 Inside the capsid we find the RNA genome. Lentiviruses are unique in the world of RNA viruses in that they carry two copies of RNA. It isn't known exactly why they do this but since converting RNA back into DNA is a very complex process which is prone to lots of errors it is probable that having an extra copy is for backup in case something goes wrong.

There are also several other important proteins packaged inside the capsid. One, reverse transcriptase, converts RNA into DNA once the capsid enters the cell. The other, integrase is involved with integrating the DNA into the cellular chromosome. 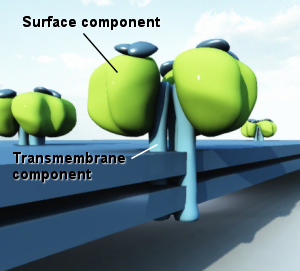 In order to replicate all viruses need to get their genome inside of a host cell. To do this viruses make use of an assortment of proteins that exist on the surface of cells which the cell normally uses for its own functions.

Next: The life cycle of the CAE virus