The Biology of the Goat Articles

The Secret Lives of Goat Parasites

Goat owners mount a significant effort to eliminate infections of parasites which can cause harm and misery to their goats. If, for only a short time, the worry over parasites can be set aside in favor of a closer look at their life history, interesting, even mysterious discoveries can be learned.

The relationship of internal parasites to the host is often complex. Larvae can go through phases in which one stage bears no resemblence to another. Some parasites require more than one different species of host, while others can alternate between free-living or parasitic forms.

Adults of internal parasites must live and take nourishment in some organ of the host and then find a way to infect other hosts. With few exceptions, the egg once laid, exits the host, hatches in the often hostile environment, then the juvenile larvae must find a way to get inside another host to develop to the adult stage. 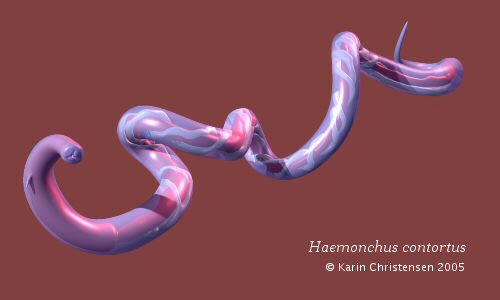 The life cycle of a nematode worm, such as Haemonchus contortus which causes so much trouble for goats and their owners, is an example of a simple, direct type of life cycle which requires only one host.

The adult, female worm lays eggs which leave the goat's intestinal tract with the feces. The first-stage larvae hatch out and feed on soil microbes and bacteria. When the first-stage larva grows large enough it matures into the second stage. The somewhat rigid, protective outside membrane called the cuticle must be shed so the larva can grow. The second stage continues to eat and when the time comes to molt to the third stage, the larva does not shed its protective cuticle, but retains it. The third stage larva then has two protective cuticles called a sheath which helps it survive in the environment. However, the two membranes completely encloses the larva which prevents its ability to eat.

The third-stage larvae spend the next few months working a short way up moist grass every morning, waiting patiently for a goat to come along and eat it. 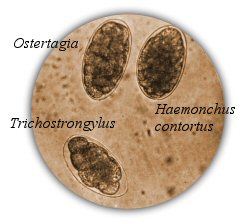 When the sun gets too hot and the grass dries out, the larvae crawl back down to the cooler, moist surface to wait for another day.

If the larva is lucky enough to be ingested by the goat, the third cuticle is shed with the help of digestive enzymes in the rumen allowing the fourth stage larva to emerge by the time it reaches the fourth stomach. After feeding at the lining of the stomach wall or small intestine for a short time, the fourth stage develops into the adult stage and begins mating and laying eggs shortly after.
View an animation of the life cycle of H. contortus

Another type of nematode parasite which usually does not cause the goat much trouble has a more fascinating life cycle. Males and females of Strongyloides papillosus, the intestinal thread worm, live freely in the soil almost everywhere in the world. They feed, mate and lay thin-shelled eggs which produce more free-living worms. This free-living worm also goes through four larval stages, but does not require a animal host. 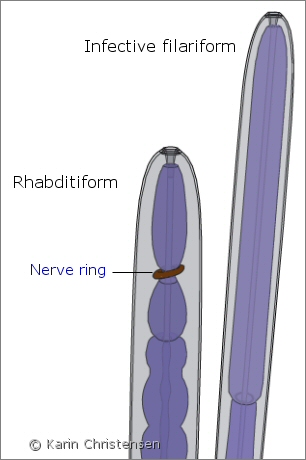 However, under certain conditions, some of the second-stage larva will molt into an infective form of third stage larvae. The anatomy of the esophagus is the only obvious difference between infectious and non-infectious third stage larvae. Infectious larvae called filariform have a long, cylindrical-shaped esophagus like all infectious nematodes. The esophagus of the free-living or rhabditiform S. papillosus is shorter, wide at the mouth end with narrow portion which opend into a bulb shape. There are valves between the portions.

Why the larva decide to become infectious is not well understood. Since more infective forms are produced when the environment conditions are unfavorable, it's tempting to imagine that the young larvae somehow know that they need to spend time safe and sound inside a warm mammal. It's more likely though that both forms are produced in the egg stage but environmental conditions favor the survival of one over the other.

Infective third stage larve can enter the goat by being swallowed on feed and then continues in nearly the same development path inside the goat as H. contortus. However, unlike H. contortus third stage larvae, S. papillosus has no protective outer sheath so cannot resist drying in the environment.

More typically, infective S. papillosus third-stage larva burrow through the skin of the goat, usually in the area of moist skin between the hooves. This can cause itching and the inflammation can lead to invasion of foot rot bacteria. The larvae enter the blood stream where they are carried to the lungs. They work their way out of the lung tissue into the alveoli, migrate up the bronchi to the trachea where they are coughed up and swallowed to continue on to the adult stage in the intestine.

Eggs laid by parasitic adult S. papillosus leave with the feces and then can hatch into either the free-living or more infective forms. What makes this parasite even more unusual is that the infective parasitic worms that live in the goat's intestines are all females. Parasitic males are unknown. The females are self-fertilizing hermaphrodites, producing fertile eggs without the help of males. These parasitic females are much longer than the free-living forms and in heavy infections can be seen with the naked eye in fresh feces.

Other parasites that infect goats require a different species of animal or insect to complete some stage of its life cycle. The goat tapeworm, Moniezia expansa which lives in the intestine, expels packets of eggs onto the pasture. A tiny mite must come along and eat the egg which will then hatch inside of the mite as a larval form. The goat accidently ingests the mite carrying the tapeworm larva while feeding. When the mite is digested, the tapeworm larvae escapes, attaches to the lining of the intestine then develops into the adult form.

View an animation of the life cycle of Moniezia tapeworm

The large liver fluke, Fasciola hepatica which infects goats, sheep and cattle also require an intermediate host to develop through stages that have little resemblance to one another.

The adult fluke lives in the bile ducts of the liver, laying eggs which travel out of the host with the feces. The eggs hatch in water into the first-stage, cilia-covered miracidium which swims about looking for the right species of snail to play the role as intermediate host.

The miracidium actively attacks the surface of the snail injecting a sporocyst into its body. Each sporocyst produces 5 to 8 redia, the third larval stage, which live and feed on the snail's tissue. Each redia produces many fourth-stage larvae called cercariae. This stage leaves the snail, uses a tail-like structure to swim around until it finds a plant stem where it attaches, loses its tail and secretes a protective coating. There the encysted cercaria waits to be eaten by a goat so that it can continue to its adult stage and begin the process again.

View an animation of the life cycle of Fasciola hepatica

The eggs or larvae of parasites play a passive role in infection. They can't do much else but wait for the right host to come along and ingest it or in the case of the liver fluke miracidium swim around with the hope that the right snail will cross its path. This is a hit-or-miss way of continuing the life process and in natural conditions the odds are against larvae suriving long enough to find the correct host.

The strategy that some adult parasites use to insure that their species will continue to exist is to produce huge numbers, in some cases hundreds of thousands, of eggs in their short lifetime. This represents probably the highest reproduction rate of all living animals.

Eggs and larvae are protected from the environment with thick shells or cuticles. Larvae of some parasites use intermediate hosts to gain acess to the definitive host, remaining safe from environmental pressures inside an arthropod or snail.

S. papillosus goes out of its way to make certain that its species survives either by living and pairing freely in the soil or parasitically in the gut of the goat without the need for males to produce fertile eggs.

While we may wish that all internal parasites would vanish to make our and the life of our goats' easier, it does give us something to pause and think about. Considering the obstacles that parasites must overcome to reproduce themselves, in finding new hosts, surviving the harsh environment, then add to that our increasing arsenal of effective anti-parasiticides, it is amazing that they are able to survive and do as well as they have.